13.8 million citizens of the EU 28/EFTA member states aged between 15 and 64 did not live in their home country (country of their citizenship) in 2018 and this figure grew by 45% in comparison with 2008. Growing trends can be observed for residents of the majority of the member states of the EU respectively EFTA; significant increases are however recorded in south-eastern European countries, Poland, Hungary and in the Baltic states.

“The creativity, the spirit and the ability to stand up again and go beyond your own boundaries define the soul of Europe”

Pope Francis, award of the Charlemagne Prize, 6th of May 2016

The share of Romanian citizens with residence outside Romania in the entire population was at 17.3% in 2018, whereas in 2008 this share only amounted to 8.4%. The share of women – just as in all other countries (except Poland) was higher than that of men. This share also clearly grew in the 10-year comparison in the following countries:

33% of EU/EFTA citizens living abroad are vocationally or academically qualified
In 2018 one third of persons of economically active age (15 to 64) with residence outside their home country have completed tertiary education (vocational colleges, universities or universities of applied sciences), 40% have completed vocational training, and 26% have no qualifications.

Mobility of EU and EFTA citizens as defined by the freedom of movement of persons, one of the four fundamental freedoms of the European Union, is very high with 22% of EU/EFTA citizens leaving their home country for Germany to live (and work) there, with an additional 20% going to United Kingdom respectively 10% to Spain. 15% of Romanian citizens live in another EU/EFTA member state, with this figure being 11.3% for Croatians respectively 10.6% for Bulgarian citizens.

Table 2: The following nationals (the three most frequent nationalities of EU/EFTA citizens) were living in the EU and EFTA member states as of 1st of January 2018: 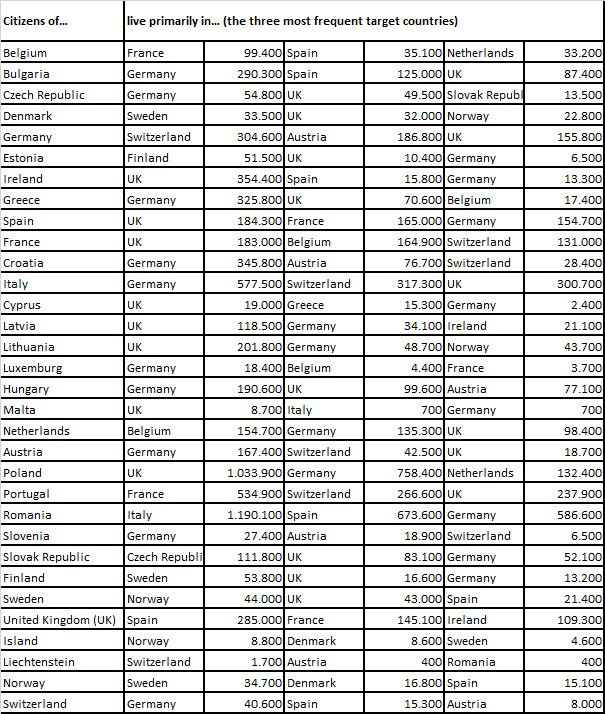 Note: To represent the mobility of labour, the labour market and demographic data of nationals from an EU/EFTA member state are consolidated and analysed in the database of the European Commission (EUROSTAT database). Individuals analysed herein and aged between 15 and 64 have been living (and working) for at least 12 months in another EU/EFTA member state.