The reason for this rising employment in the member states of the PES Network in previous years was mainly due to a considerable increase in labour force participation of people from the older age cohorts. This trend continued in comparison with the third quarter of 2022 and 2019 with an employment growth of older people (55 to 64 years old) of +9.3%, but the number of employed young people (under 25 years old) also increased by 4.5%, and the number of people of prime working age was at the same level as in the third quarter of 2019. 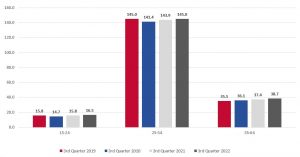 Source: Database – Eurostat lfsi_emp_q, no data for Liechtenstein and Romania

A detailed analysis shows that the employment development in the countries of the European Union, Iceland and Norway (no data for Liechtenstein and Romania) varied strongly.

Employment trends for the 15-24 age cohort declined in both the Baltic States and South Europe, these also fell in Luxembourg, Malta and Portugal, but employment declined most significantly in Poland, at -18.6%.

For the 25-54 age group employment fell in most of the twelve member states at a moderate level over a three-year comparison; however in Latvia and the Czech Republic it dropped by more than 4%.

Figure 2: Employment development (in %) and increase of employment rate (in percentage points) of the 15 to 64 years old; third quarter 2019 to third quarter 2022: Member states of the PSE network 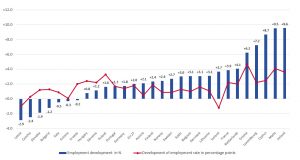 Source: Database – Eurostat lfsi_emp_q, no data for Liechtenstein and Romania

According to the OECD forecast for the demographic development of August 2022 twenty PSE Network Member States are to expect a noticeable decline in the working age population of 15 – 64 years old by 2050.

Countries in Eastern and South-Eastern Europe in particular are projected to see a decline in their working-age population, but the Baltic States will see the largest decline: Latvia -35.0%, Lithuania -33.4% and Estonia -14.1%.

Demographic transition will be one of the key challenges of the coming years: in the member states of the PES network, 23.7 million 15-19 year-olds will potentially enter the labour market in 2022 (potentially, since a large part are still in education), compared to 27.1 million 65-69 year-olds leaving. This already results in a labour force potential gap of 3.4 million people, which will widen to 6.3 million in 2050.

Figure 3: Relative change in working population in the member states of the PES Network 2022-2050 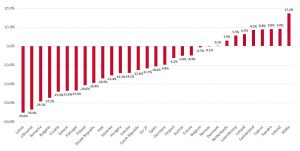 Source: OECD, no data for Liechtenstein and Romania