The level of the European Labour Market Barometer continues to deteriorate and stands at 99.5 points in December. That correlates with a drop of 0.2 points compared to November. All of the Northern and Eastern European countries lie clearly below the neutral mark of 100 points.

In many European countries, war and the energy crisis are pushing the labour market prospects into the red zone

Both components of the labour market leading indicator of the European Network of Public Employment Services and the Institute for Employment Research (IAB) fell slightly by 0.2 points compared to the previous month. At 98.1 points, the component for the unemployment forecast lies significantly below the neutral mark of 100, which indicates rising unemployment. The employment component remains in the positive zone at 101.0 points and points towards an increase in employment. 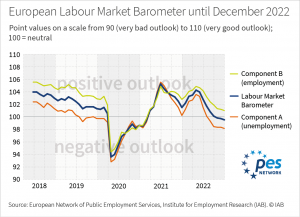