The European Labour Market Barometer showed a decline for the seventh time in a row in November. The labour market leading indicator of the European Network of Public Employment Services and the Institute for Employment Research (IAB) dropped 0.1 points compared to October and now lies slightly below the neutral mark of 100 points at 99.7 points. It is therefore only a question of a minor decrease compared to the previous month as the barometer had fallen even faster prior to that.

With a drop of 0.1 points, the component for the unemployment forecast currently stands at the level of 98.2 points, which indicates rising unemployment in the European countries. The component for the employment forecast fell by 0.2 points to 101.1 points, but therefore still remains in the positive zone. In none of the Eastern European countries, the Barometer shows values above 100, however. Here, Enzo Weber, IAB head of forecast, sees a connection with the Russian war against Ukraine. 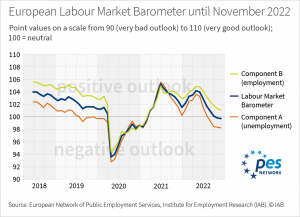