The European Labour Market Barometer has continued its downward trend in August. The labour market leading indicator of the European Network of Public Employment Services and the IAB fell by 0.8 points compared to July, but still remains above the neutral mark of 100, standing at 100.9 points. The additional risks posed by a possible escalation of the energy crisis still persist.

The component for the unemployment forecast dropped by 0.7 points to the current level of 99.3 points, thereby falling short of the neutral mark of 100 for the first time in a year and a half, signalling an increase in unemployment. A look at the individual countries also shows this to be the case for Germany and the Eastern European countries. Here, the process of integrating Ukrainian refugees in the labour market and recording them statistically is bound to play a role.

The employment component also falls compared to July, showing a decline of 0.9 points yet again. However, with a score of 102.4 points at the moment, it still remains clearly above the neutral mark, which indicates increasing employment.

The war in Ukraine is dragging down Europe’s economy. And the integration of Ukrainian refugees is also leading to higher unemployment for the time being. Nonetheless, the European labour markets are still holding their own

A small number of countries also recorded rising barometer values in August compared to July. These include Austria, Belgium-Flanders and Belgium-Wallonia. 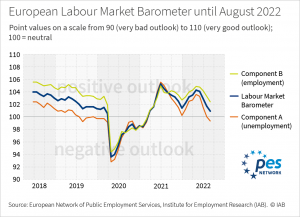