The European Labour Market Barometer fell again in July. The labour market leading indicator of the European Network of Public Employment Services and the IAB dropped by 1.1 points compared to June, but continues to remain at a good level at 101.9 points. A possible halt in gas supplies poses a further risk.

With a drop of 1.5 points to the current level of 100.2 points, the components of the unemployment forecast showed a stronger decline than the components indicating the development of employment, which lost 0.7 points and stands at 103.5 points in July.

The European employment services still see the outlook for employment as good, but the effects of the war are becoming more noticeable

Several countries recorded a clear decline in the unemployment component, including Denmark, Germany, Belgium-Wallonia, Bulgaria and Cyprus. In many countries this is most probably connected to the fact that Ukrainian refugees are now increasingly becoming integrated in the labour markets.

In the short term, the path to finding a job often leads through unemployment. But Europe’s labour markets offer employment opportunities for refugees from Ukraine 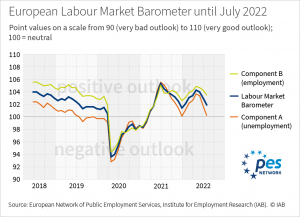