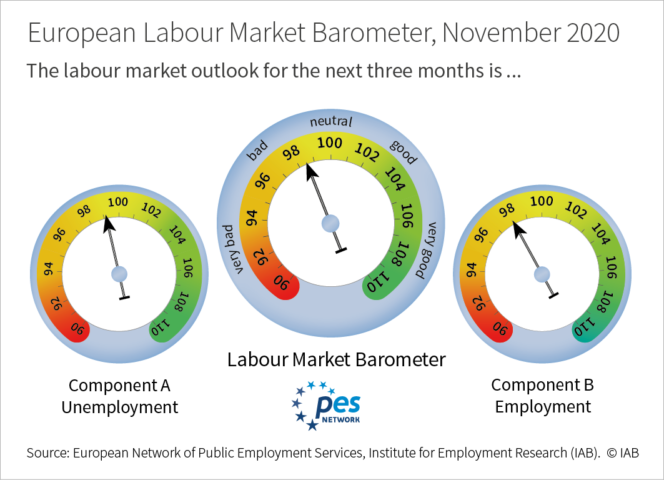 In November, the European Labour Market Barometer stands at 98.5 points. The leading indicator published by the European Network of Public Employment Services and the Institute for Employment Research (IAB) thus points to a moderately negative development of the European labour market in the coming months.

During the spring lockdown, the European labour market was in a state of shock. While the second corona wave is hampering its recovery, another Europe-wide downturn is not expected 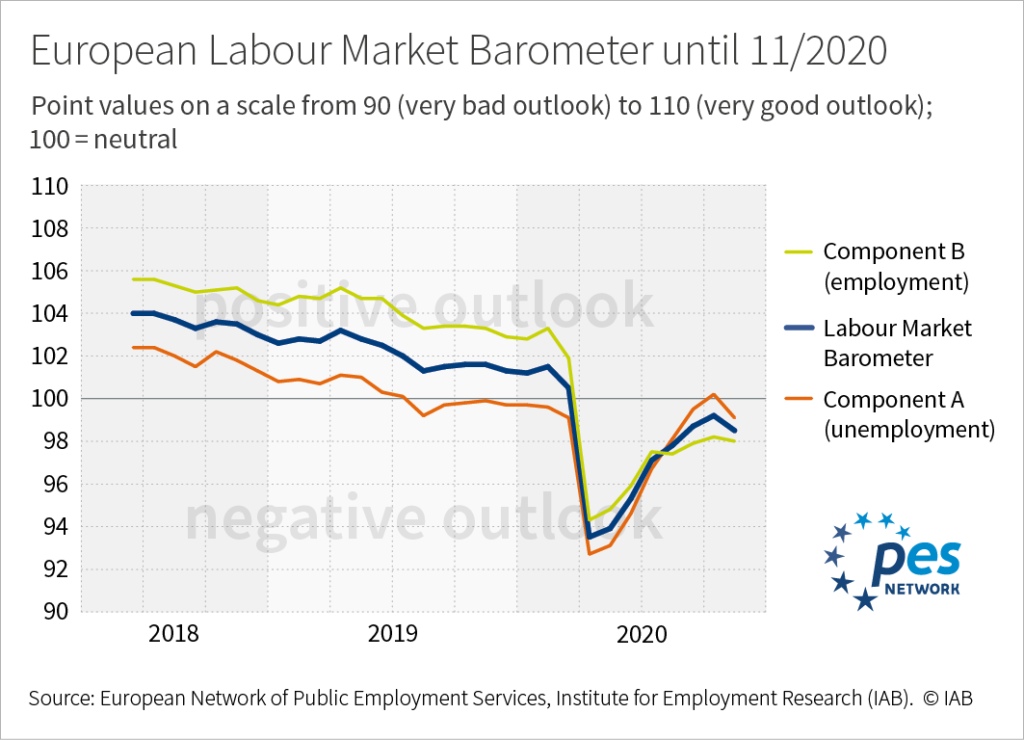 With vaccines on the horizon, there is a glimmer of hope. This enthusiasm is offset in the short term by the effect of the lockdowns in European countries

This autumn, the barometer values per country are unusually divergent. This reflects the varying development and extent of the second corona wave and government reactions that are much less uniform compared to the first lockdown in spring.

The European Labour Market Barometer is a monthly leading indicator based on a survey among the local or regional employment agencies in 16 participating public employment services. The survey is carried out jointly by the employment services and the IAB since June 2018. Participating countries include Austria, Bulgaria, Cyprus, the Czech Republic, Denmark, Belgium-DG, Belgium-Flanders, Germany, Iceland, Liechtenstein, Lithuania, Luxembourg, Malta, Poland, Portugal and Belgium-Wallonia. While component A of the barometer signals the development of the seasonally adjusted unemployment figures for the next three months, component B forecasts employment trends. The average of the components “unemployment” and “employment” constitutes the total value of the barometer. This indicator thus provides an outlook on the overall development of the labour market. The scale ranges from 90 (very poor development) to 110 (very good development). First, a barometer score for each of the participating employment services is determined. The European barometer is then derived from these national scores in form of a weighted average. In November, Poland participated for the first time and started with a comparatively low barometer score. Without this effect, there would have been no decrease compared to the previous month.