The European Labour Market Barometer rose again in October. The leading indicator for the European labour market generated by the European Network of Public Employment Services and the Institute for Employment Research (IAB) rose by 0.5 points. Reaching 99.2 points the indicator is still in the negatives but has now recovered a significant part of the sharp decline in April.

The labour market in Europe has recovered after the first lockdown in spring. However, the second Corona wave poses a major risk throughout Europe once again, 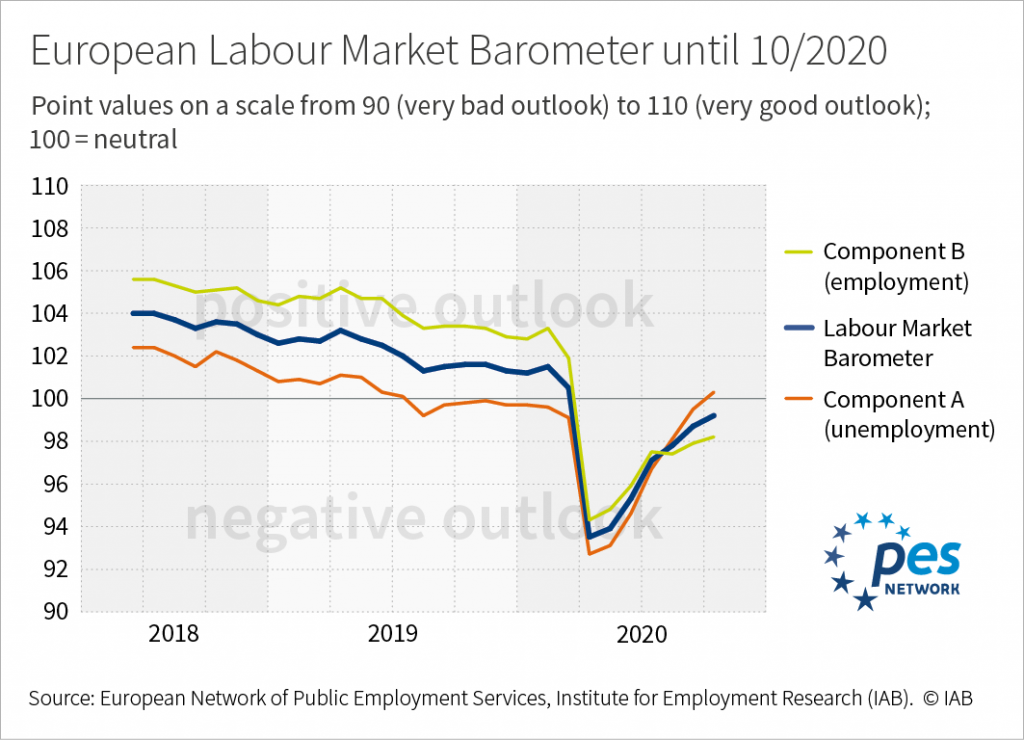 It should be noted that the survey period ended before the strong increase in infections in the past two to three weeks. The sub-indicator of the European Labour Market Barometer for the development of seasonally adjusted unemployment rose by 0.8 to 100.3 points in October. It has thus left the negative area that signals rising unemployment in the next three months. The sub-indicator for employment also increased compared to the previous month. At a value of 98.2, it continues to reflect scepticism about the employment trends despite a plus of 0.3 points.

The uncertainty about further setbacks on the European labour market remains

The European Labour Market Barometer is a monthly leading indicator based on a survey among the local or regional employment agencies in 15 participating public employment services. The survey has been carried out jointly by the employment services and the IAB since June 2018. Participating countries include  Austria, Bulgaria, Cyprus, the Czech Republic, Denmark, Belgium-DG, Belgium-Flanders, Germany, Iceland, Liechtenstein, Lithuania, Luxembourg, Malta, Portugal and Belgium-Wallonia.

The time series of the European Labour Market Barometer including its components for all 15 participating employment services are available at www.iab.de/Presse/elmb-components.